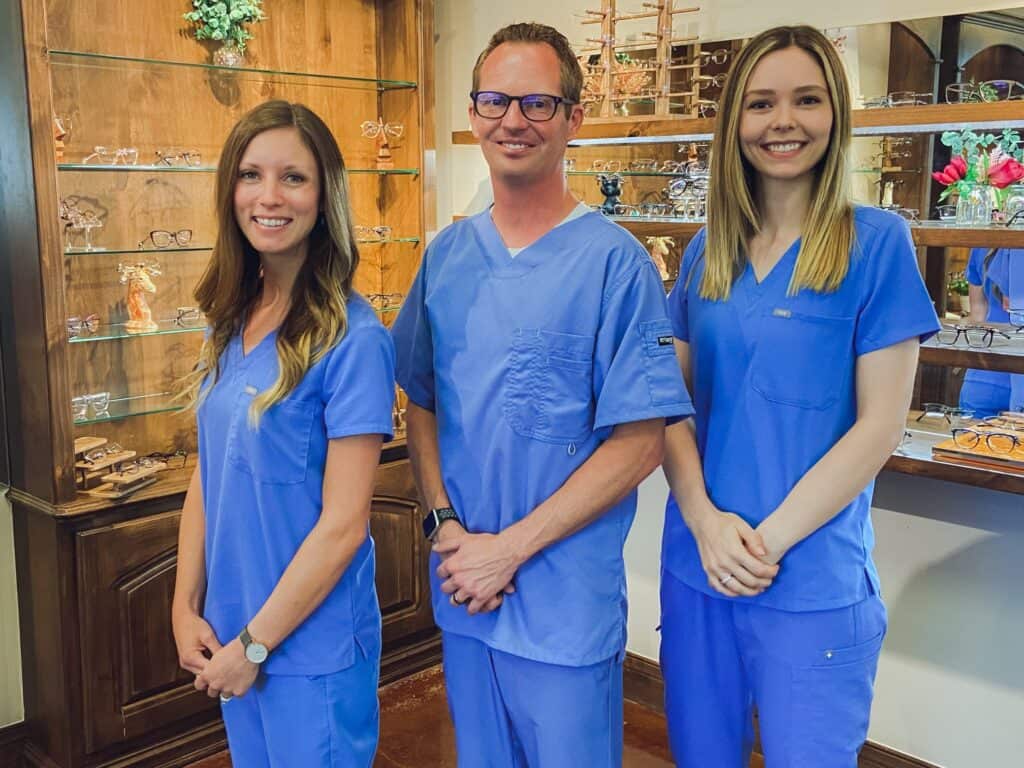 Dr. Patrick married her husband, Aaron, in September 2013. They have two precious fur babies named Jenny and Maddox. They love going to Battle Creek Church in Broken Arrow. Together they enjoy traveling to explore new cultures and landscapes, spending time with family and friends, and being in the midst of the great outdoors. In December 2021 they welcomed their first daughter Elanor Kay Patrick.
Dr. Patrick likes hiking, gardening, and baking sweet treats. Dr. Patrick is extremely excited about the opportunity to join the family at Insight Eyecare and work alongside Dr. Tate to serve the community at the Glenpool office. Dr. Patrick sees all new patients at the Glenpool clinic. She treats all age groups including kids. Dr. Patrick treats all types of eye diseases including dry eyes, glaucoma, and diabetes.
“It is my dream to have all of our patients experience and enjoy all aspects of life with the clearest and most comfortable vision possible. I want to help our patients understand their ocular health and use technology when available to make this happen.” – Dr. Kristin Patrick

Dr. Tate was born and raised in Tulsa where he attended Jenks and Metro Christian Academy. It was at Northeastern State University that he realized Optometry was an amazing field where he could make people’s lives better. Dr. Tate says, “I believe everybody deserves to enjoy the beauty in our world every day through amazing vision! My goal is to help each patient understand their options and the technology that can impact them every day through their eyewear and eye care. That is worth working hard towards.”

In 2007, he received his Bachelor of Science in Organismic Biology from Northeastern State University in Tahlequah. Dr. Tate began optometry school that year at The Oklahoma College of Optometry, where he earned his Doctorate of Optometry in 2011. Immediately after graduation, Dr. Tate began his ocular disease residency with Eyecare Associates of South Tulsa. Soon after Dr. Tate completed his board certification in optometry and completed his fellowship with the American Academy of Optometry.

Dr. Tate met his wife, DruShea Dear, in a microbiology class at Northeastern. The two became lab partners and the rest was history. Soon after they were married, they moved back to the Bixby area on a few acres. Dru is an attorney who focuses on Estate Planning, Guardianship, and Probates. Her passion is to help clients break down the issues, craft creative solutions, and get the problem resolved as quickly and effectively as possible. She can be reached at www.southcountylawok.com.

In his spare time, Dr. Tate enjoys restoring old cars, spending time on the water, hunting, doing farm work, and being with his family. On May 2nd, 2013 Dr. Tate and his wife Dru had their first child, Lexi Nichole Tate! She has been Dr. Tate’s pride and joy, Lexi even helps him in the garage on his Mustang. Lexi has grown to be a loving but fiery little girl. She currently attends Metro Christian Academy where Dr. Tate graduated high school. On June 30th, 2016 they had their second daughter, Holly Layne Tate. Holly is a sweet loving girl who loves to laugh at her big sister and crazy acting dad. Holly absolutely loves makeup and shopping with her mom. The Tates were blessed with their 3rd Daughter on October 15th, 2018. Gentry Rose Tate is a sweet strawberry blonde girl who laughs at all the crazy antics her big sister and dad do.

”My dream is to have everyone be able to see in high definition. Whether that means utilizing high technology scanning technology in the exam room or unique high-quality eyewear. I believe glasses and contacts should make your life better! They should not be a hindrance. Insight Eyecare offers amazing new technology in lenses and unique fun frame companies to choose from. At Insight Eyecare we can get you glasses so you feel confident in how you look and see better than you knew was possible.” -Dr. Kyle Tate
Dr. Tate spends much of his time helping operate Insight Eyecare and the other businesses he and DruShea own. As of right now, Dr. Tate is not open to new patients.
Facebook-f Twitter
Menu
© 2022. Insight Eyecare. All Rights Reserved.
Scroll to Top